Machame Route to the Roof of Africa

The Shira route, approaches Kilimanjaro's summit from the west and crosses the caldera of Shira Volcano before heading beneath the southern ice fields of Kibo. Shira route is accessed by road, which essentially bypasses the rain forest zone and so the actual hike starts at a much higher altitude. For this reason although it sounds appealing, it is less favorable than due to the relatively high altitude of Shira's starting point. For those that are already well acclimated however, the route is seldom used by other trekkers and so your initial two days on the mountain are less crowded than on most other routes. The remainder of the route joins in with the routes from Lemosho and Machame. Starting your climb on the western side means paying for extra transport.

Towards Shira ridge, the terrain becomes more rocky and soon melts into an expansive alpine desert, decorated with large deposits of volcanic rock and fine grey dust. Glacial ice pours off the summit, stretching ice like fingers down to a height of about 4800m. At this point, you have breath taking views of Lava Tower. The crater of Kilimanjaro houses one of the most circular volcanic vents in the world, Ash Pit, and looming above the crater and Furtwangler Glacier, stands Uhuru Peak. At 5895m above sea level, it is the highest point in Africa, and the highest freestanding volcano in the world.

Shira Gate to Simba Camp
Elevation: 11,800 ft to 11,800 ft
Distance: 4 km/2 miles
Hiking Time: 1-2 hours
Habitat: Heath
After breakfast, we head out on a 5 hour drive to the Londorossi Park Gate at 2200m, taking in sights of the east rift valley and animals en route. After completing park formalities, we drive for a further 26km to the Simba River where the trailhead begins. After a packed punch, we trek abut 3 hours to the Simba Campsite. The trek begins. We climb for 3 to 4 hours, with a packed lunch en-route, to Simba campsite at 3500m.

Elevation: 11,800 ft to 12,500 ft
Distance: 6 km/4 miles
Hiking Time: 2 hours
Habitat: Heath
After breaking camp, we begin the short hike up to Shira Camp, at a height of 3840m. This is usually takes no more than 2 hours, but this rest is required for adequate acclimatization. In the early afternoon as the clouds lift, you should have clear view of the west face of Kibo volcano (commonly referred to as Kilimanjaro) After lunch, you can take the chance to walk up towards Lava Tower in the to aid acclimatisation, of jus relax around camp taking in views of Mt Meru in the distance.

Elevation: 3840 metres up to 4630 metres then down to 3950 metres
Distance: 10 km
Hiking Time: 6 hours - 8 hours
Habitat: Alpine Desert
After breakfast, you will quickly leave the moorland scrub behind and enter into a moonscape of semi-alpine desert, while you hike constantly upwards toward Lava Tower , and impressive structure near the base of Arrow Glacier, at 4600m. Around 4200m, you may start to feel the effects of altitude with shortness of breath and irritability, assuming it had not taken effect earlier on the climb. You still stop for lunch either before or at Lava Tower . (If you plan to add an extra acclimatisation day, this is a good place to stop). After Lava Tower , your route will head down by almost 680m to the Barranco camping. This is the day where you will follow the principle of climb high and sleep low. Barranco camp is situated in a valley below the Breach and Great Barranco Wall, which should provide you with a memorable sunset while you wait for the preparation of your dinner.

Elevation: 3950metres up to 4550 metres
Distance: 13 kilometres
Trek time: About 7 hours
Early morning, you will head up the impressive Great Barranco Wall. The route then heads down through the Karanga Valley over several ridges and valleys where you will see the magnificent giant Senecio Kilimanjari. You will then join up with your later descent route where you will head left up the ridge for another hour, before reaching Barafu Hut.

Elevation: 4600 metres to 3100 metres
Highest point: 5895 metres (Uhuru Peak)
Distance: 30 kilometres (7 kilometres ascent, 13 kilometres descent)
Trek duration: 13 to 16 hours (6 - 8 hours ascent, 7 - 8 hours descent)
Environment: Stone scree / ice-capped summit
You will rise around 23h30 on 19th November, and after some tea and biscuits you will head off 'pole pole' into the night. Heading in a North westerly direction you will ascend through heavy scree towards Stella Point (5685) on the crater rim. The hike up is about 6 hours. The remainder of the climb to Uhuru Peak will take anything from 1-2 hours. After your moment of glory, you will head back to Barafu, in about 2 hours where you will have a chance to rest, buy a cola or two before heading down towards Mweka hut (3100m).

After an early and well-deserved breakfast, it is a short 3-hour scenic hike back to the Park gate. Those climbers who reached Stella Point (5685m) are issued with green certificates and those who reached Uhuru Peak (5895m) receive gold certificates.

After breakfast you are transferred to Kilimanjaro airport for your flight home.

How difficult is Shira Route

The Shira Route although it is beautiful and remote starts at a much higher altitude which means less time to acclimitise. It is for this reason that adding on extra time to acclimate is highly beneficial. Either that, or doing a pre acclimitisation trek like Mt Meru is great. After Shira Camp, the route merges with Lemosho and follows the southern circuit route.

How long is Shira route?

Is Shira a busy route?

Generally speaking it is not busy, although crowds are determined by the time of year. On top of that from Lava tower onwards you join with the Machame and Lemosho route and it will become busier from then on.

When is the best time to climb Kilimanjaro on Shira?

There are two distinct trekking seasons during which is the best time to climb Kilimanjaro. They are January-March and June-October. January-March is generally colder than June-October and there is a higher probability of encountering snow on the summit.

Kilimanjaro is just three degrees south of the equator, so the lower slopes are generally hot and dry reaching 25°C during the day. This quickly dips with each ecological zone however, open heathlands, alpine desert and then, at the summit, categorically Arctic. Temperatures at Uhuru Peak are between -7 to -29°C.

Are there camp grounds on Shira route?

Every night stop has an area with drop/toilet facilities, that are designated areas to allow for camping. You will sleep in tents.

This is a popular question. The toilets that are available on the mountain are pretty rudimentary unless you are on Marangu, and are really just a wooden or block building with a hole in the ground (or a 'long drop'). One option though it adds to the cost is to hire a portable toilet. Finally, although there may not be toilet facilities when you really need them during the days trek, we ask that you seek out a 'loo with a view' away from the path, and keep your used paper in a small bag to dispose of later at camp so as to preserve the environment.

What is altitude sickness?

Altitude sickness, also called mountain sickness, is a group of general symptoms that are brought on by climbing or walking to a higher and higher altitude (elevation) too quickly. High altitude is defined as 8,000 - 12,000 feet (2400 - 2600m) above sea level. Altitude sickness can affect anyone who goes to high altitudes without giving the body time to adjust to the changes in air pressure and oxygen level. Symptoms usually come on within 12 to 24 hours of reaching a higher elevation and then get better within 24 to 48 hours as your body adjusts to the change in altitude. Because Kilimanjaro has a rapid ascent profile, altitude sickness tends to be more common than on some other treks. It is for this reason that taking your time is vitally important and why shorter routes have a lower success rate.

What are the full moon dates for this year

Do we support any porters initiative

Very definitely yes. Porters and guides are the life blood of any successful mountain climb. Through our partners in Tanzania we support various charity initiatives including the most important Kilimanjaro Porters Society. This society was registered under the name Mount Kilimanjaro Porters Society on 30th September 2005 as a non governmental organization with a certificate no 13296 under the organization art of the United Republic of Tanzania. The society exists as a shield for porters who are registered under it with the goal of improving the living and working condition of these porters.

Shira Route at a Glance 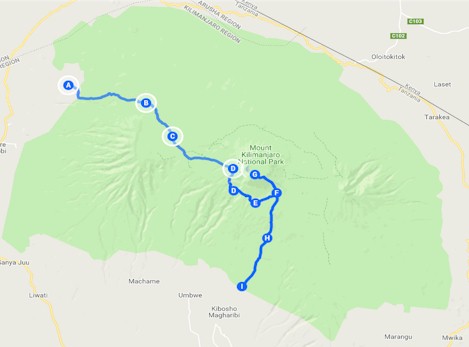